You’ve seen the picture, now go to the real story at  Swimming for Aphrodite

Understandably services and Festival programmes are being cancelled due to the economic situation and the Electra that I had booked from Australia for last night was cancelled due to an actress injury. How was I to know? Just lucky I guess. I went to the website to get the address of the theatre and there was the announcement – ‘more shows cancelled.’ It seems that several productions have not opened at all.

Tonight, however, I’m off to theatre heaven at Epidavros, hence my unmitigated excitement. I can overlook the heat, the chaos of the bus station and my uncertainty of getting there by just focussing on seeing the metaphorical ‘curtain’ go up on Ajax in four hours time. When I told the hotel receptionist I was coming to this event, she said, as she clutched her heart, ‘that is a sacred place.’ And that’s exactly how it feels – making that homage no matter what.

The theatre poster with a deranged and bloodied Ajax carrying a bloodied sheep is extraordinarily evocative and here I am now sitting on the nearly full Epidavros bound bus. Clearly there are many other classics lovers that are ready to share the experience. I’m also very happy that my exploration of all of Sophocles’ works earlier in the year familiarized me with this play and I’m very excited to see how Ajax unfolds on this hallowed stage.

Right now we have just passed over the Corinth Canal and the deep blue Aegean Sea is on the left of the bus. People are swimming, big cargo boats are doing their thing and I might even spot an inter island ferry. Quite perfect. To my right are the magnificent Peloponnese with the silvery green of the olive trees on the plain meeting the darker green of the conifers on the mountain and below there is the sea with random islands of random sizes jutting up at will.

On arrival at Epidavros, there is a bus driver announcement I don’t understand and I ask a travelling companion as to the content – 20 minutes after the play the bus with return to Athens. The responder is delightful, Magda, travelling with her mother, Sophia, and with whom I spent the rest of the evening, despite Sophia continuing to address me in Greek, as she doesn’t speak any English, whereas Magda is delightfully, totally fluent.

And now to the play itself, Ajax by Sophocles. In many ways this was the most traditional presentation of a tragedy that I’ve seen presented at this site. In the first instance, the players and musicians entered the space in a musically accompanied procession which was at once aurally arresting and visually appealing as they crossed the rear of the stage in half light in what could be regarded as an homage to Dionysus, or simply a way of attracting audience attention as in No theatre. Whatever the intention, it worked. The instrumentation was haunting, and although using what I regarded as contemporary instruments including a trombone, there was a true sense of lament and dramatic expectation. In keeping with the notion of what is believed to be the traditional use of music, song and dance in Greek tragedy, this was the first time I have ever seen it implemented. A ‘troubadour type’ of character playing a balalaika sang the prologue and some of the chorus speeches were also sung. There is a moment in the play when the chorus proclaims:

I would dance, I am bent upon dancing! …

I would dance, I am bent upon dancing!

I found it a strange utterance when I read the play sometime back, but this director made good use of it and it became a sort of a Zorba moment – when there’s nothing else to be done – just dance. Sadly for me the dance wasn’t as evocative as Zorba’s but with the whole of the chorus breaking into dance, the tension of the piece was satisfactorily altered.

Another nod to the tradition of the form was the erection of a type of skene with an open front where the musicians and chorus congregated when not on stage. The play itself could be regarded as a story of post war trauma, where Ajax, having defeated Achilles at Troy, is enraged when Achilles’ armour is awarded to Odysseus and not him. Deeply offended by this injustice, Ajax turns his anger into blind fury, which in turn, leads to the unhinging of his mind and he runs amok with his sword and the intention of annihilating his fellow Greeks. [One cannot but help think of the anger and rage of Vietnam veterans and the enormity of their psychological disturbance.] Fortunately for Ajax however, Athena steps in and instead of Ajax slaughtering humans, he slaughters cattle and sheep.

Odysseus enters the story looking for the slaughterer of the stock only to find Athena who tells him to reconsider his own actions in the event. As the play unfolds we are presented with the ‘morality’ of Greek tragedy where the individual is pitted against the state, in this case Ajax, the warrior, against the wily Odysseus and the establishment, representing a new order of things.

In his abject humiliation, Ajax announces his resolve to throw himself on his sword to end his misery. What ensues is a lengthy discourse about the merits of the man and how to prevent him suiciding – which does not happen.

I think this an overwritten play and one that is extremely challenging to stage. The physical appearance of Athena on stage is a first as is someone committing suicide and the extensive use of music and dance seems to have originated from Sophocles’ own juvenile experiences as a chorus member.  The director, Vangelis Theodoropoulos, led the logistics quite well but I felt the quality of the acting, or perhaps it was the inexperience of the actors, prevented a magical and seamless engagement with the intensity of the text.

[During my research for this article I found a most accessible translation:

With a gap in my theatre going schedule, I headed off to see this famed island of Atlantis. Previously I had avoided this excursion due to the intense popularity of the place as a tourist destination. However spurred on by the call of Plato and his descriptions of Atlantis in Timaeus, I purchased a two day tour which I extended by a further day. I never cease to marvel at the way tour companies organise your travel and just turn up to collect you, deposit you at the ferry, have your name on a card waiting at the other end and so on and so forth. I am mightily impressed especially in a place like Santorini where Internet is temperamental to say the least! Arriving after a 5 hour ferry ride, I quickly check into my rustic hotel, book a tour to Akritori for the next day and then head off to discover the locale of Kamari. A somewhat predictable summer resort with the same sort of shops as every other seaside resort, I saw a huge queue for a bus and following the advice of the local travel agent jumped on board to get a bit of night life in Fira.

At E1.20 the bus ticket was the best value ever. It felt like we travelled about k30 across these volcanic hills to reach the most precarious city one could imagine. Perched on the edge of the volcano’s caldera, 980 ft above sea level, shops, hotels and restaurants abound through the steep little lane ways. And there it was – one of the famous sunset scenes that we get on friends’ postcards. The depth of the caldera at 400 meters enables all but the biggest of ships to anchor in its protective harbour.

So what is it that makes Santorini so spectacular? Firstly it’s a place of unbelievable contrast. The empty, rocky landscape with pumice stone and lava innocently sitting amongst stunted grapevines, tomatoes, aubergine, wild capers and pistachio trees. And then there is the Aegean Sea that never fails to deliver that extraordinary deep, deep blue with the little white caps – the colours of the Greek flag.

Then there are the cave houses and churches, said to be 365 of them, one for every day of the year. But without a doubt, the highlight for me was Akrotiri. Said to be the second most important site in Greece after the Acropolis in Athens, Akrotiri, only discovered in 1967, is considered to be the lost city of Atlantis. At the entrance gate there is a 70 ton volcano stone and this sort of volcanic evidence is everywhere.

The stunted vegetation being so because of the sea winds and not needing to be any higher because of the richness of the volcanic soil. And the taste of the fruit and vegetables is spectacular. As is Akrotiri. A Minoan Bronze Age settlement the volcano is thought to have occurred 1627 BC. 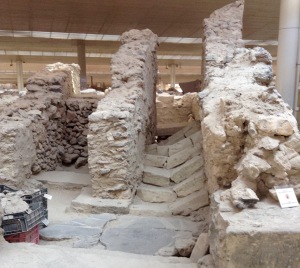 On entering the archaeologically protected site, one is struck by the white lava powder that covers almost everything. Excavations on this site were discontinued because of the Greek austerities but there is enough evidence to indicate that a city with a 5 storied bastion existed here. With city streets, plumbing, houses, shops, bathroom accoutrements, bedrooms and beds, olive oil jars and household decorations significantly intact, the somewhat eerie thing is that there is no evidence of any dead bodies or funerary apparatus which suggests that the people just left.

It appears that even though the site displays earthquake protections, somehow the inhabitants seemed aware of the approaching volcano and gathered up their belongings and went who knows where. When I asked about archeologist’s faith in Plato’s account of the city, the beautiful, engaging and highly intelligent tour guide turned up her nose and claimed a lack of chronological veracity. I was somewhat saddened by that as I was always intrigued by Plato’s description of a racecourse in the city.

The famous frescoes of the Boxing Boys, the Spring fresco, the mother and daughter and more have been removed and placed in museums elsewhere. This was an intriguing visit and with years perhaps even centuries of excavation still to go, who knows what else might be discovered. The remainder of the day was some sightseeing with a tour guide, a fabulous lunch of local Santorini fare, a visit to the famous Santorini winery and then, for me, dinner with a charming Canadian I’d met the night before.

Next day an 11 hour ferry trip back to Athens was exhausting, arriving at 11.30pm at new hotel digs and a total wipe out.