Today I was joined by my friend, Rosslyn Blundell, who was visiting me from her Archeological dig in Prato, Tuscany. Assisi is a short train ride from Spoleto, but with the Bob Wilson show starting in Spoleto at 17.30, we committed to see only the Basilica of St Francis to ensure we returned in good time.
Once more the day was very hot and we passed through fields and fields of sunflowers under a clear blue sky. My interest in Assisi stemmed from Sandra Shotlander’s play, Blibd Salomein which I played Bernice. Set in Assisi, the dramatic narrative depicts a contemporary relationship that attempts to echo the relationship of St. Francis and St. Clare but with a twist.
Arriving at the station at Assisi, I was astounded at the hilliness of the location and once more we relied on the community bus to transport us to the Basilica to view St. Frances’ tomb. The church is very grand indeed and scattered throughout the remainder of the hillside are other buildings of religious significance with tourists, and perhaps pilgrims, taking advantage of this special place. In all I think I would have preferred to visit a more humble St. Francis location. I believe that his garden, is somewhere near by but the day was scorching.
For me however another special place was a very cute Trattoria where we escaped the heat and had a beautiful lunch.
Back in Spoletto, the town was alive with excitement. This was the last night of the festival and the main event was The Old Woman at the Theatre Nuevo Carlo Menotti. This is a very grand Opera House that is highly ornamented in the Baroque style. There are 4 levels of boxes and our boxes were centrally located with a centre stage view. Booking tickets and finding they are in a box and not in conventional theatre seating is an experience in itself, in that one scrambles for any seat in any box that is empty if you find yours full!

And now to the show itself. A Robert Wilson production is an experience that I think defies genre. He is a master of light, sound and simple aesthetic in light box style. A good deal of the aesthetic pleasure is derived from shape and form being contrasted against a backlit cyclorama so that even a stage hand moving a piece of furniture has beautiful dark form and shape as she moves across the stage. How do we know its a she? By the shadow play of her body.

The show starts with a madcap front of cloth mime with Baryshnikov and DaFoe establishing a high camp sense of the ridiculous. The cloth itself is decorated in nursery rhyme style with the prominence of a bright red dog. My mind was in a whirl trying to decipher what this was all about. Looking for links and clues as to what I was seeing. Both Baryshnikov and DaFoe are in black suits, white face and Ginger Megs style hair dos which project marvellously in the light box. True, the publicity blurb mentions Absurdism, Beckett and Ionesco and so I was prepared for some degree of intellectual stretching.
Repetition of sparse dialogue, tableaux, and evocative sounds was a feature of the piece and slowly the narrative [?] begins to unfold. The Old Woman take is central to the action and the actors response to her death is another storyline. As a representation of the 20th century Absurdist writer/ poet Daniiel Kharms’ view of the world, en.wikipedia.org/wiki/Daniil_Kharms, the mime and dance were stunning. While the text was in English,with Italian subtitles, there was also a good deal of Baryshnikov dialogue in Russian which seemed to provide a metaphysical element. Sadly this alluded me as it was also translated into Italian and was not part of my comprehension. However my sense of the piece was the self talk and repetition of the human mind and how images and situations are magnified out of proportion. This was achieved by a skeletal chair, bed, door and swing which dwarfed the actors and looke marvellous with the speciality lighting against the cyclorama. My mind was also trying to explore the notion of video or games media but there came a time when I made a conscious decision to let that and all other notions of explanation go by and just let the experience take me where it will. After all isn’t that the whole premise of Absurdism?

And that’s why I believe a Bob Wilson work is an experience. I sincerely hope you, too, have the chance to see this extraordinary work at some time in the future. Wilson’s works tour the world and Australia has had two productions this year. The touring programme can be seen at robertwilson.com/calendar

http://www.mif.co.uk/event/the-old-woman provides a review of the premiere of The Old Woman at the Manchester Festival with some great photos of Baryishnikov and DaFoe. 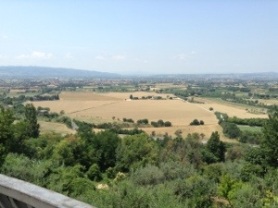 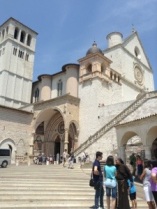 Only 27 days to go before I’m on the plane to Athens! I’m in a travel frenzy organising iphone and ipad communications and theatre reservations.

Athens: 5 shows in 6 days including Antigone, Iphigenia at Aulis and best of all, Medea, at the Ancient Theatre at Epidaurus. My 3 favourite plays that happen to be about women.

Spoleto: Because theatre in Rome is closed for the summer I decided to head north to Umbria and although it is not in my plan of tracing theatre history chronologically, there is some not-to be-missed theatre such as Robert Wilson‘s The Old Woman and Irina Brook‘s, Island Trilogy. Some times one can just get lucky!

But another stroke of luck, I did find classical Roman theatre in Spain. So as well as doing the Almagro festival I will head over to Merida for a production of The Golden Ass by the second century author,  Apuleius. It is the only Latin novel to survive in its entirety. Please check out the Roman ampitheatre it’s extraordinary!   http://www.spain.info/en/reportajes/teatro_romano_de_merida_el_ultimo_refugio_de_las_musas.html

Finally thanks to Pan Australian Travel for being so accommodating to my theatrical whims.  http://www.panaustravel.com.au