The Roman Pont, The Castle, Installations, The Odyssey and The Illes des Esclaves, Irina Brook

One cannot leave Spoleto with out investigating the imposing Castle on the highest hill. A beautiful walk in streaming sunshine, across the Roman Pont and aqueduct into the beauty of a wonderfully restored building which was housing some marvellous (and free) Spoleto Festival installations. Of particular interest to me was the Iraqi/Afghan film/animation The King of Black which is on loan from New York and which went to the Venice Biennale.
cryanmcvinney.com/…/short-film-the-king-of-black-premieres-in-venice/
http://www.artmediaagency.com/en/…/shoja-azari-at-the-55th-venice-biennale/ provides some background on this fascinating artist who exquisitely explores and expresses the beauty of the Persian aesthetic.

The photographic exhibition entitled Don’t Ask Where The Love Has Gone speaks for itself and the beautiful costume sculpture is a delight.
I hope you enjoy the photos. Sadly, I’ve missed the Peter Greenaway which is a little disappointing in the light of his Last Supper in the Melbourne Festival a couple of years back.

The highlight of the day was course The Odyssey. A 14.00hrs show which was 85% full is testament to the power of Spoletto and the drawing power of Irina Brook and her Dream Theatre.
http://www.irinasdreamtheatre.com provides a synopsis of the plays and details about the actors, one of whom is Australian.

This was a romp from beginning to end with a group of unruly students challenging the Classics Professor as to the boredom of the text and then erupting into an experiential expression of Odysseus’ journey. The journey itself, and the various episodes including Penelope, Ithaca, and Circe were hilariously improvised and my absolute favorite was Cyclops wearing a snorkeling mask for his one eye, plus a giant great coat and sound effect giant steps resounding with every gigantic move. Hopefully in the photo you’ll be able to detect the small fluffy toy sheep that served to avert Cyclops’ attention as the stranded party made their escape. Although suitably abbreviated, the narrative remained consistent with Homer and I’m confident that all the audience left with that warm fuzzy feeling of having seen a thoroughly enjoyable entertainment. I certainly did.

Amongst the photos you will see how the previous evening’s set was stored as well as the one for the upcoming evening performance at 7.30. It shows quite a masterly example of logistics and efficiency for touring the Island Trilogy.

Returning at 7.30, this time as pre show punters we were welcomed aboard an airliner. The Isle d’Eclaves is a French classic by the 18th century playwright Pierre Marivaux. www. en.wikipedia.org/wiki/Pierre_de_Marivaux
Arlequin What struck me was the use of the name Arlequin in the piece and when I discovered that Marivaux was more successful in the Comedie Italienne, there is another link I am looking for to Commedia delle Arte. Arlequin is the wily servant.
en.wikipedia.org/wiki/Harlequin
I also wonder if this work inspired J.M.Barrie’s The Admirable Crichton written in 1902 which addresses similar issues.
In this contemporary adaptation, the high flying French couple are setting out on a skiing holiday with their respective male and female servants. In a nut shell the aircraft crashes, the party is stranded, the servants become the masters and after a suitable amount of reverse power mongery and due humiliation, eventually everyone becomes equal. For me, this was the lesser of the three works and I feel that it just didn’t have the finesse of the other two. While the other plays mostly had the same electrifying cast, the three different actors in The Ilse D’Esclaves didn’t match the energy and exposition of the craft that I had seen previously. On reflecting on this, it might well be impossible for a director to sustain a certain style when new energies are brought into the mix. I also had a sense that perhaps this work had not been in development and/or rehearsal/playing for as long as the others.
I sincerely hope that The Island Trilogy is picked up as part of the festival circuit for Australia, with two out of three plays being quite sensational, it is superb theatre and was well worth the trip to Spoleto. 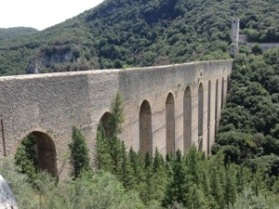 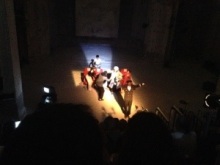