PORNOGRAPHY by Witold Gombrowicz
This was a programme I chose from a deep resistance to the subject material and because I knew very little about this acclaimed Polish writer.
en.wikipedia.org/wiki/Witold_Gombrowicz
My first surprise came when I realized that the theatre for this event, Teatro Francesco Torti of Bevagna was not on the Spoleto map. Where is Bevagna?’ I asked the incredibly helpful Festival Office attendant, ‘in the country’ was the reply, ‘but there is a festival bus to take you there, however you need to book 48 hours in advance.’ I’ve encountered a couple of examples of this sort of bureaucracy in my travels and managed to solve it with a big smile and pleading the ignorance of a foreigner. Anyway, Chiara secured a seat on the bus and in the meantime I took advantage of a free concert in the Largo Di Clementi. It was a 6 piece wind ensemble with the emphasis on saxophones of all sizes plus a clarinet made of gold. When the concert finally got under way, the music was charming.Then off I went to Bevagna with another 60 or so Pornography revellers.
Once more the countryside was beautiful with fields and fields of sunflowers in the 7 pm sunshine.
Arriving at Bevagna was like arriving on a film set that one had seen many, many times.
The town is medieval and Teatro Francesca Torti absolutely amazed me. I am told that these sorts of theatres exist all over Italy, but for me it was a first in that it was a provincial Teatro and did not have the gaudiness of Renaissance theatres. I had booked a ticket in the gods as this production was not high on my list of must-sees, and on arriving in the dizzy and hot heights of Loggione, I was greeted by a swathe of Roman murals on the ceiling and walls. The charming Senorita, informed me that if the theatre was not full I could venture down to the stalls. This I did, prompted by a Philosophy student, and I ended up in a box! What an adventure.
And then 3 hours of the play, thankfully with an interval, when I crossed square for a gelato.
Pornography is set during WW2 and is more a question of voyeurism than pornography. As an adaptation, and an Italian premiere, I believe it could benefit from concerted cutting. One delight for me was the use of the tracks in the stage which could make items of furniture and other paraphernalia appear and disappear at will.There was a performance by a strikingly attractive 40-something woman that was a standout. Not only did she shake with every fibre of her body to indicate her state of anxiety, she later appeared totally naked and blood smeared as a victim of rape and murder. That performance was truly arresting.

In my initial research tracing the development of theatre from Ancient Greek to Ancient Roman theatre, I had been unsuccessful in locating any extant theatres of the medieval period in Italy, let alone theatres presenting early Roman or Christian material. So here I was in a 251 seat Medieval theatre that had been beautifully renovated in the 19th century. Mr Google translated some details for me:

Teatro Francesco Torti, Bevagna
Piazza Filippo Silvestri 06031 BEVAGNA PG Tel 0742 368123 Fax 0742 361647 Type: Theatre E-mail: pbevagna@bcsnet.it – sociali@comune.bevagna.pg.it Disabled access: YES Monumental building: YES Visits: YES Capacity seats: 251
Where is
Torti The theater is located in the main square of Bevagna , a charming medieval village situated on a small hill at the western edge of the Umbrian Valley.
Today the theater is part of the Circuit City Museum which includes a visit to the Museum and the Mosaic of the Roman Baths . In this circuit, recently, it has been joined another, the Cultural Crafts Medieval , with separate ticket or cumulative.

It was once
The theater is housed in Palazzo dei Consoli, built in the thirteenth century.
On the ground floor is still the loggia, covered with three large Gothic arches and a quarter smaller, probably used as commercial space.

Why visit
One of the smaller theaters of Umbria, only 251 seats, is dominated in its limited size by harmony and perfection.
Tastefully decorated, contains interesting paintings nineteenth century, the particular location within a historic building nell’asimmetrica Piazza Silvestri, makes the visit even more striking.

Description
Made in 1886 by architect Antonio Martini, is named after the local scholar Francesco Torti.
The theater has a plant in a horseshoe, three tiers of boxes and a loggia; railings are made from cast iron columns.
The ceiling is the work of Mariano Piervittori and represents the Muses dancing. The original curtain was painted by Domenico Bruschi with Propertius Torti who points to his homeland in 1886 during the restoration of 1994 was another curtain created by the painter Luigi Frappi Bevagna with’ll Clitunno river with poetic and memorial temple.
The coat of arms above the curtain in 1380, donated by Pope Innocent IV, it states “OSF”, which stands for “Ob servatam Fidem.”
After the structural restoration, the theater is regularly active.

Curiosity
The construction of the theater was strongly supported by the citizens who in 1871 had gathered in an organizing committee. The inauguration took place on the evening of August 28, 1886, for the occasion, the impresario Alfredo Wolves staged the ‘Ernani, along with The boarders of Sorrento.

http://www.regioneumbria.eu/default.aspx?IDCont=2570 has a lovely (professional) photo of the theatre.

http://www.teatrostabile.umbria.it/pagine/bevagna-teatro-torti – has a wonderful photo of the ceiling fresco depicting the muses and thus evidence of the carry over from Greek to Roman.

OK so I saw a 20 century piece of theatre, but just finding the theatre was gold and I would certainly include it as a must see if organising a tour. I think this is the first time the theatre has been utilized in the Spoleto Festival but wouldn’t it be great if they could stage a medieval piece in there? Perhaps some of my actor friends and I could do it under Angela O’Brien’s theatre history
guidance.
Any of my theatre cronies up for it? 🙂 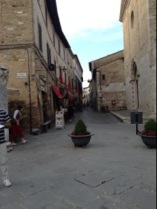 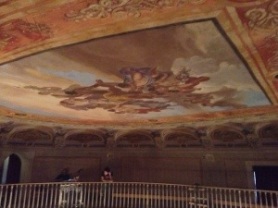 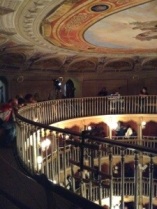